Mindset Over Matter: Research and Findings Into Leadership Mindset, Gender Differences Regarding Mindset, and Its Impact on Leadership Performance

Mindset Over Matter: Research and Findings Into Leadership Mindset, Gender Differences Regarding Mindset, and Its Impact on Leadership Performance
by SkylineG

Anecdotally, people will tell you that to accomplish anything in business or in life, you have to have the “right mindset.” But what is a mindset exactly? And how do you know if you have the “right” one—specifically as it relates to being a leader? In this paper, we explore the range of leadership mindsets, focusing on the ones that are most linked to effective leadership and how you can cultivate them.

What is a Mindset?

Your mindset is a culmination of your background, life experiences and influences, and natural inclinations—and it is not fixed. Mindset shifts can occur naturally as you experience new situations or are exposed to new influences, or they can happen intentionally—if you realize that your mindset is not serving you, you can actively work to shift it. The key is self-awareness.

Why the Leader’s Mindset Matters

However, if the leader has a more fixed mindset, they believe that some people are naturally skilled and some are not and no amount of effort will change them. This type of leader is less motivated to support the development of their team because they don’t believe that it will improve their performance.

Not surprisingly, leaders with growth mindsets tend to achieve more because they actively set goals for themselves that are above their current capabilities and then put in the work to expand their skill sets. These high achievers who are continually learning and growing are the ones you want at the helm of your organization.

The 15 Leadership Mindsets—And Which Ones Matter the Most

As a leader, you can work to nurture and stimulate your own mindset as well as those of the people on your team to achieve higher levels of performance. The first step is ensuring you have cultivated the right leadership mindset in yourself.

In July 2017, Skyline Group’s Organizational Intelligence Institute surveyed more than 600 male and female leaders to explore how mindset influences both perception and behaviors.2 We began by identifying the 15 mindset continuums related to the common roles and attributes of leaders, such as problem-solving, goal orientation, growth, and focus (see Table 1). Then we surveyed leaders to determine which mindsets were the most important and where they believe the most effective leaders fall on each continuum. 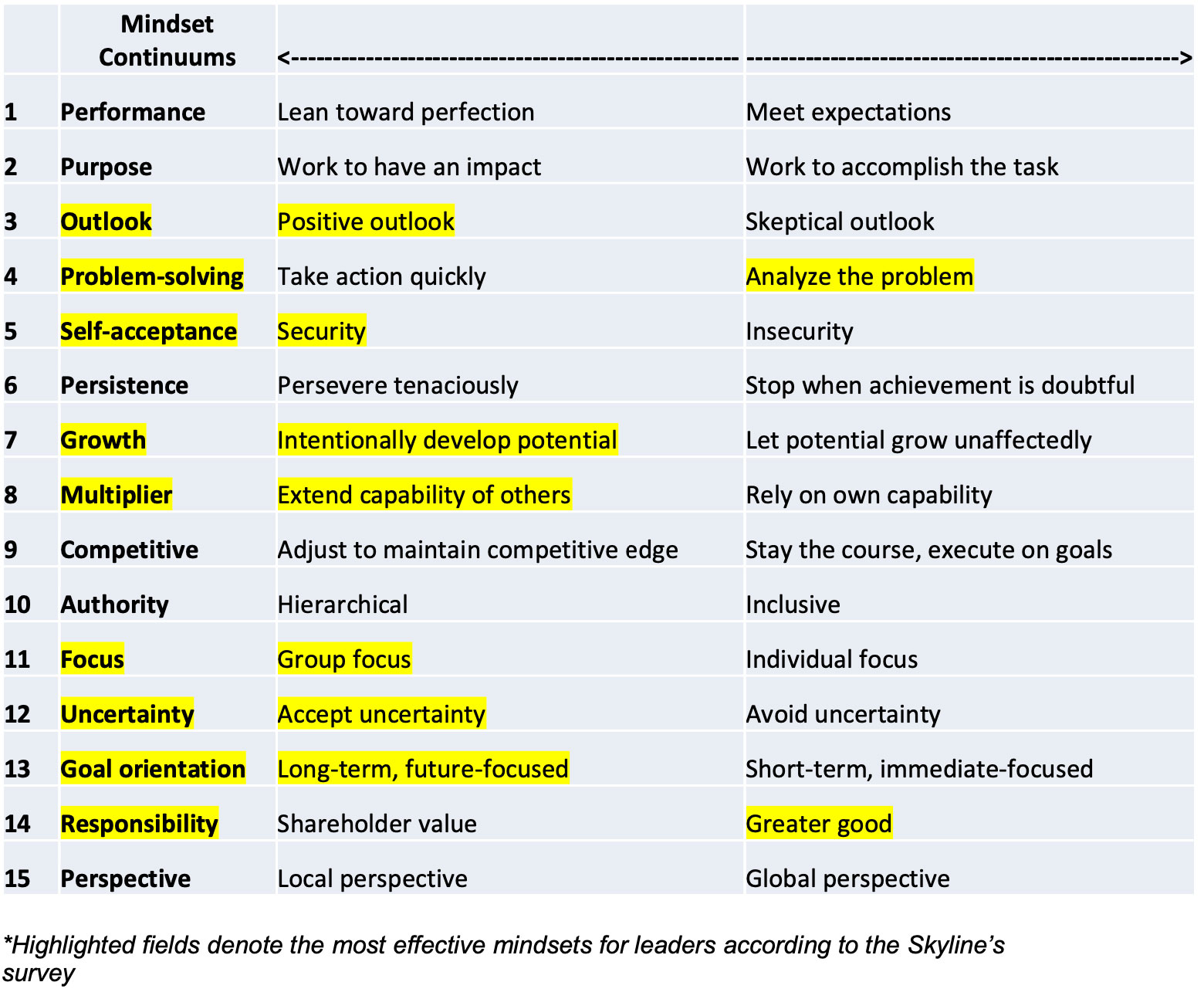 The survey identified nine leadership mindsets that leaders themselves found crucial to effectiveness:

In analyzing the results from the survey, it became clear that the participants view all effective leaders as:

1. Comfortable with themselves, optimistic about the future, and motivated to achieve

2. Long-term thinkers who take a holistic and thoughtful approach to problem-solving

3. Group-focused who treat others with respect and are intent on optimizing others’ capabilities

However, when the results were separated by gender and generations, we found some clear differences in leader expectations.

According to the survey, women leaders are held to a different, and even higher and more idealistic standard than their male counterparts. While women must exhibit the nine leadership mindsets listed above in order to be perceived as effective, they are also expected to be more balanced and more inclusive than men:

There were also significant findings specific to gender and expectations of effectiveness of female leaders:

These survey findings continues to reinforce previous research that women are harder on women and expect more of female leaders than they do of male leaders.

When breaking down our survey participants into generations, we found that Millennials have very distinct notions of what makes an effective leader. The millennials surveyed prioritized balance—especially when it came to the Multiplier and Goal-Setting mindsets.

Millennials want their leaders to be focused on expanding the capabilities of others and on self- reliance. They also believe their goal orientation should be equally focused on long-term and short-term solutions.

This is also consistent with the 2016 Skyline Gender Survey where Millennials were more balanced in their views of leaders of both genders.

Study any prominent leader and it will become clear which of the mindsets they are operating under and how they are driving their success (or failure).

In an article on the ten best leadership moments of 2016, Fast Company writes, “The smartest leaders are the ones who look out for their employees.”It gives the example of Hamdi Ulukaya, CEO of Chobani, who created a stock program for employees in which they are allowed to transfer their shares into stock or cash in the event of a sale or initial public offering (IPO). With this decision Ulukaya exhibited the following mindsets:


Ulukaya acted in the interest of the long-term needs and future financial wellbeing of his employees at the short-term expense of himself, his executive team, and others on the top not only because he felt it was the right thing to do, but because it was a strong, strategic business decision. He invested in the future success of Chobani by “retaining talent and maintaining internal satisfaction,” writes Fast Company.

On the opposite end of the leadership spectrum, there is founder and CEO of Theranos, Elizabeth Holmes, who highlights how the wrong mindset can be a serious liability to an organization.

Holmes led a startup that sought to disrupt healthcare by offering cheaper and less invasive blood tests. After an investigative report by The Wall Street Journal in 2015, doubts surfaced on what their product could actually do.9 Holmes continued to defend Theranos’ testing and methods, and refused to allow outside scientific scrutiny or peer review. In 2018, the US Securities and Exchange Commission brought a complaint alleging that company deceived investors and the public.

The company had told investors that with just one finger-prick of blood, it could run a multitude of common medical tests and obtain the results within hours. It was in fact running most of its tests on machines manufactured by other companies. Holmes falsely told investors that its products were used by the Department of Defense and that the company would bring in a thousand times more revenue in 2014 than it actually did, the SEC alleged.

As CEO, the mindsets Holmes seemed to be operating under were:


Holmes’ leadership mindsets clearly contributed to her downfall. Both Holmes and her company have agreed to settle the cases with a $500,000 penalty. Holmes was also made to relinquish voting control of the company, return the shares she obtained during the alleged fraud, and she cannot be part of the leadership of a public company for a decade.

By avoiding the issues bubbling up within the company and attempting to find band-aid solutions that did not address the roots of the problems, Holmes’ mindset was her and her company’s downfall. Ultimately, all of her strengths as an entrepreneur and innovator could not compensate for her poor leadership.

Shifting to the Right Mindset

The mindset of a leader is one of their greatest personal resources and the key to unlocking it is self-awareness. If you are cognizant of where you fall in the most important leadership mindset spectrums, then you know how you have to shift to become more effective.

3. Conquering the fear of failure

Seeking feedback. Nobody likes unsolicited criticism—at least not when it’s first given. But if youare someone who actively seeks feedback, you are more cognitively prepared to receive it—and benefit from it—if and when it comes your way.

Active reflection. Giving yourself the time and space to reflect on your actions—and the feedback you receive from your actions—is necessary to understand what is working for you and what isn’t. It also allows you to think through what alternate actions and strategies may serve you better next time.

Conquering the fear of failure. A fear of failure limits the potential for leadership growth, according to Walter, as that fear prevents them from experimenting. “Someone who fears failure... is more likely to self-handicap themselves to provide an excuse for failure instead of extending increased effort toward accomplishing the task.”

How Companies Can Help Leaders

Company culture plays a critical role in getting leaders into the right mindsets. The organizational environment must be one in which leaders feel comfortable seeking feedback, actively and openly reflecting on their performance, and operating with minimum fear of failure.

There are several ways in which organizations can support their leaders in cultivating the right mindsets. The first is to actively encourage learning and experimentation by providing resources and development opportunities to expand their skills and perspectives. Some of the most common and effective leadership development opportunities include challenging assignments and coaching.

Another key component of creating a supportive culture is ensuring feedback loops are embedded into the work flow. This can be done through formal goal monitoring processes as well as regular 360-feedback assessments.

The last way leaders can feel empowered to make the appropriate shifts is to ensure that the top levels of the organization are modeling the right mindsets and acting accordingly, that is, by seeking feedback, sharing their reflections on their own performance, and bouncing back from failure.

Your mindset is the way you see and interpret the world. It is a culmination of your background, life experiences and influences, and natural inclinations—and it is not fixed. Mindset shifts can occur naturally as you experience new situations or are exposed to new influences, or they can happen intentionally—if you realize that your mindset if not serving you, you can actively work to shift it.

As a leader, you can work to nurture and stimulate the mindsets of the people on your team to achieve higher levels of performance. The first step is ensuring you have cultivated the right leadership mindset in yourself. To that end, Skyline Group’s Organizational Intelligence Institute has identified the nine leadership mindsets that leaders find crucial to effectiveness:


It is important to note, however, that there are some gender and generational differences in perceived leadership effectiveness. For example, millennials tend to prioritize balance in their leaders (as opposed to leaning to any one side of the mindset continuums). In addition, male leaders may have more leeway in exhibiting mindsets that are on the “wrong” side of a mindset continuum while still being seen as effective.

Study any prominent leader and it will become clear which of these mindsets they are operating under (or not) and how it is driving their success (or failure). To increase your effectiveness as a leader, it is important to study yourself with the same rigor. If you are cognizant of where you fall in the most important leadership mindset spectrums, then you know how what shifts you need to become more effective.

According to Walter, the three paths to developing the right leadership mindset are:

1. Seeking feedback—so you are emotionally prepared to receive and act on it

2. Active reflection—to understand what is and isn’t working for you

3. Conquering the fear of failure—so you feel free to experiment with new, possibly more effective ways of thinking and being

All three of these paths are dependent on an intimate awareness of yourself as a leader and an honest acknowledgement of your strengths and weaknesses.

From an organizational perspective, there are several ways in which businesses can support their leaders in cultivating the right mindsets. The first is to actively encourage learning and experimentation, for example, through challenging assignments and coaching. Companies must also ensure feedback loops are embedded into the work flow, for example, through formal goal monitoring processes as well as regular 360-feedback assessments. And perhaps most importantly, the top levels of the organization must model the right mindsets by seeking feedback and sharing their reflections on their own performance and bouncing back from failure.

1. Fixed Mindset vs. Growth Mindset (What Characteristics Are Critical to Success). (2017, October 25). Retrieved April 24, 2018, from https://www.developgoodhabits.com/fixed-mindset-vs-growth-mindset/

9 Carreyrou, J. (2015, October 16). Hot Startup Theranos Has Struggled With Its Blood-Test Technology. Retrieved May 7, 2018, from https://www.wsj.com/articles/theranos-has-struggle... 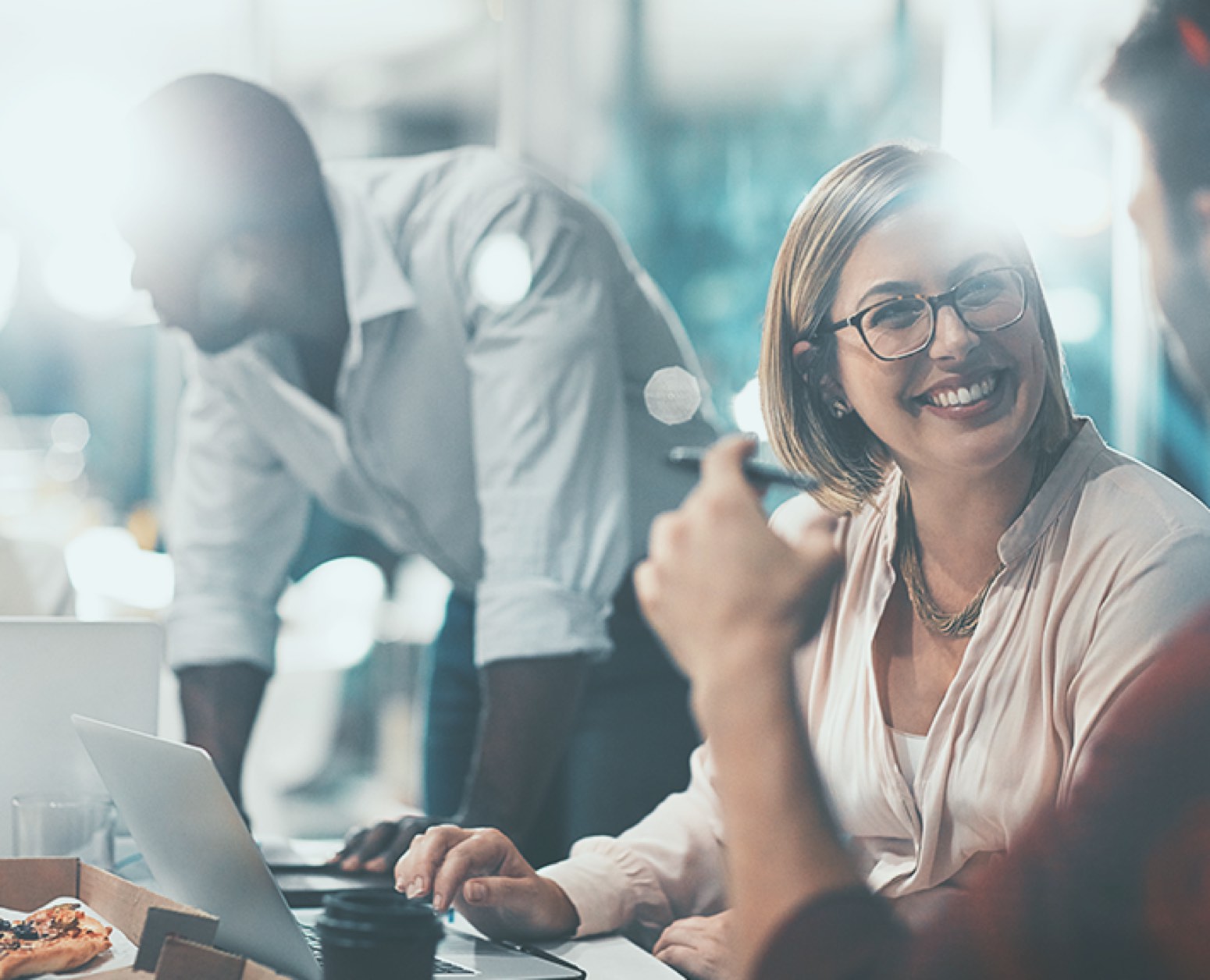