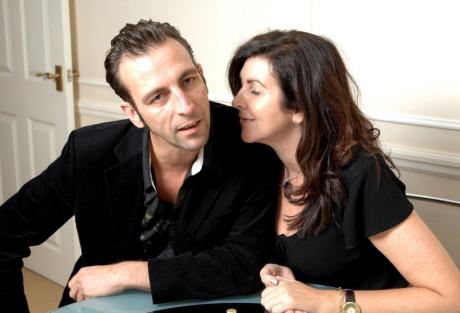 Imagine two almost exactly the same people standing in front of you making a presentation. Although not identical, they are both very similar in their physical characteristics, sharing the exact same proposal, using the exact same words, tone, and the same body language. Despite the almost identical appearance, words, and delivery of their message, you are compelled more by one than the other. You wonder, what about the person compelled you to align yourself to one and not the other?

Traditionally the manifestations of “leadership” show up in what can be seen as in specific behaviors or experienced in the manner of what and how things are communicated. The combination of the verbal, non-verbal communication, and leader-like behaviors make up almost the entirety of how a leader is experienced and judged.

There have been many times in my interactions with a range of leaders in a range of settings where there was an intangible element of those leaders that I experienced as authentic, compelling, and as much as I am controlling, would be more than willing to support their vision and happily led by them. Conversely, there have been many occasions where despite the physical and positional manifestations of leadership, my experience of an individual as a leader was inauthentic – almost as though they were faking the role – despite experience, great communication, etc.

While the manifestations of a leader’s behavior, knowledge, communication, and appearance is without question the core of that individual’s effectiveness as a leader. I also question whether there is something more; that true leaders have beyond what people experience in the form of words, actions, and appearance. Something even beyond charisma – which many, and I agree to an extent, can be developed. Is there something biochemical that great leaders possess?

The Layers of Leadership

To create some structure to this exploration I have loosely created a model of leadership elements composed of the following:

Years ago as I was getting started in the world of leadership development, I heard about various training and leadership development courses using horses. I’ll admit, I initially smirked and lauded the business angle as novel. My humor, quickly moved to reflection that animals are much more sensitive than humans on picking up on a range of traits and the internal state of other mammals. However, my curiosity would not be fulfilled until many years later when I participated in a team building activity with horses. I was amazed at how these creatures could innately sense and react to each individual without the person doing anything more than being approaching the horse. The horse is picking up on body language, the chi (energy that you are giving off), and pheromones that reflect your current state.

Reflecting on this experience with the horses, my own reflection on my experience with individuals who exhibit leadership traits and are indeed people that I would feel comfortable and even eager to follow, and considering people who are want to be leaders yet they are simply that - wanna-be’s. What separates the true inspirational leader from the fake? Horses seem to get it.

Birds do it, bees do it, even antelopes on trees do it

Research on animals and their use of scent has indicated that animals use scent and pheromones to communicate a range of things for different reasons. For example, male blackbuck antelopes using their scent marked on trees to assert dominance. Fish release pheromones to communicate danger to other fish. What is really interesting about animal’s use of scent is that it is controlled and intentional.

It has been widely documented how various animal species use smell and pheromones to communicate and create social order. It only makes that the same would hold true for humans. According to research published in the November 5, 2012, journal of Psychological Science, suggest that humans communicate via smell just like other animals. Humans can smell fear and disgust, and the emotions are contagious, according to a new study. "These findings are contrary to the commonly accepted assumption that human communication runs exclusively via language or visual channels," writes Gün Semin and colleagues from Utrecht University in the Netherlands.

The majority of human-related pheromone research identifies skin as the main odor-producing organ. Odors are largely produced by the skin's apocrine sebaceous glands, and are usually associated with sweat glands and tufts of hair. These glands are located everywhere on the body surface, but tend to concentrate in six areas:

The various reactions you can expect from pheromones:

Maybe certain leaders like alpha antelopes have either a unique “leadership” pheromone or perhaps combinations or levels of pheromones that give them the scent of leadership. Conversely, unlike animals humans do not appear to have the same mastery over their pheromone production.